How to win an argument against Anarcho-Libertarians 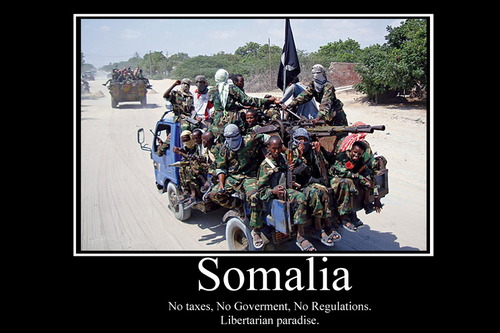 The Internet is now flooded with conspiracy theorists and ‘freedom fighters’, radio stations, Alex Jones, Stefan Molyneux and all sorts of anarchic libertarians shouting “FREEDUMB!” from the roof tops.

An easy way to win the argument - just mention Somalia, a country with no state / no government, no taxes, no regulations, and yet it’s a bloody war zone with massive poverty. That’s what ABSOLUTE FREEDOM looks like - it’s WAR!! War is when I’m free to rape, pillage and plunder, and so are you, yay Freedumb!

If you look at any country whose government has broken down you will only find massive war and massive poverty, for example Syria, Iraq, Yugoslavia, Libya, and so on. So we are in a predicament where we have to fix our governments, but we can’t get rid of them entirely.

Many of the people who would be interested in Meritocracy are currently being steered towards this Libertarian philosophy of “no government”. We have to overcome this laughable concept with reason by showing the examples above, or any other examples you know of, and we can steer these people back towards Meritocracy or any philosophy that at least makes some damn sense lol

Indeed. I like to state to these folks that they must have never heard of tribal warfare… They want more division, and less agreement on accepted truths. These are thinkers now I tell ya…

Yeah the anarchic-libertarian thing is “divide & conquer” to the max, it would be easy pickings for the Multi-National Corporations. Some of these companies are larger than any two governments combined, yet none of the anarchists point their finger towards them but only towards the governments. Their whole philosophy makes no sense, they might as well point their fingers towards The Vatican as well, because without any states or governments The Pope would be the largest recipient of Sunday “taxes” anyways.

“Anarchy,” from the word itself means without a ruler and does not necessarily mean without a government. It is very possible to have government while still allowing people to have their liberty. The United States was founded in the spirit of anarchy. When the American revolution was won, the king’s sovereignty was “equally” distributed to the people (except the slaves, a huge flaw). Everyone was a king, kings without subjects (except the slaves). A government was formed, not to rule over the people but to help the kings maintain some order/promote the general welfare. Kings rule over their government, government does not rule over kings…kings are sovereign.

All conflict between humans, both micro and macro, stem from people trying to force their will onto other people…from people trying to rule over other people. Both current events and history show man cannot rule over man, it only leads to conflict and war. An enlightened humanity will accept this truth, will find an alternative path to dealing with disagreement, and ultimately but truth over belief. - - - “Is there a place for the hopeless sinners who have hurt all mankind just to save his own beliefs?” - Bob Marley ~ ONE Love

Somalia - I am somewhat ignorant to what is actually going on over there, but from what I gather at a glance, it is just another case of humans forcing their will on other humans who are in turn either doing the same or acting in self defense. It is not an example of reality based anarchy, quite the opposite. Anarchy is not chaos like the world mis-leaders would have us think. Anarkhia is to align with Natural/Universal/Spiritual Law (they are all the same thing) Aligning with the truth of reality brings consistency, order, and finally the peace that mankind has eluded throughout known history

Your argument will quickly be lost if the ignorance ( ignore ) is addressed. Governments have already, in reality,not just in the realm of mind, committed the most monstrous crimes against humanity. How do you respond to the millions upon millions of lives claimed by government with the cries of “for the better good?”.- these crimes continue, mass chaos surrounds us, however the extent of the chaos remains unrealized by the “normal” person due to mental conditioning.

Democracy, as we know it, is an evil insidious joke “Dumb-ocracy” - groups of people forcing their will on others, only to chicken shit to do it themselves, so they ask/vote for poly-tricksters to do it for them. Until mankind realizes right and wrong is not relative, it is not subject to one’s perception… that no amount of voting can change right and wrong, mankind will remain buried under it’s own self created mountain of fuckery, and any politician who has not accepted objective morality , and thus equality, will most definitely lack the merit to be a true leader and of any benefit to humanity.

“Freedom” is a “Human Right” - does anyone even understand the who,what, where, when, why and how of human rights?

Liber~tarian-ism is not “No Government” I am not against a government that does right, just the one that does wrong. - the trap has proven to be that people/government will commit wrongs in attempts to achieve a right, but mathematically this will never work, because the universe and it’s reality is math. Liber-ty is a principle that cannot be left out of the equation, freedom is a must, but it must be understood beyond the baby mentality of “Do what ever I want” and tempered with TRUE unity consciousness not the bastardized version born from collectivism VS individualism - - -

I agree, Classical Libertarianism is opposed to all forms of master-slave relationships but stupid American Libertarianism is only opposed to governments but accepts ALL other types of master-slave relationships. There’s actually a video of Noam Chomsky stumping Stefan Molyneux on this point. Molyneux calls himself a “philosopher” and runs “Freedomain Radio”, but I think he’s a dumbass OWO cock sucker haha!

@Ed_Chy what do you think of adding this to http://meritopedia.org/? We could start a “Countering XYZ narratives” page.

If you need an account, you can get one from here: http://meritopedia.org/view/Special:RequestAccount

They tend to reject Somalia.

Another way of attacking libertarians is to disassemble the underlying philosophical foundation on which the edifice of libertarianism is constructed: Hobbes, Locke, Rand, Berlin - with a very simple and yet devastating riposte, Rousseau.

My experience with libertarians is that they have recently started arguing that Somalia is in fact a socialist state, the mental gymnastics to get around that one is beyond a rational “un-indoctrinated” human being.
I find it far more effective to counter with science, that is to say the recent studies in psychology and neurology proving that humans simply wouldnt act in the manner they expect humans to act in a “free society”, i have also noticed that they really hate to talk about the economic term known as “nudging”, as it is “anti free choice” in the marketplace. Nudging comes in many forms, like advertisements or store discounts on inferior products.

An example of studies to refer to is this one: https://www.theatlantic.com/business/archive/2013/01/the-irrational-consumer-why-economics-is-dead-wrong-about-how-we-make-choices/267255/

I think rather than engage a poor level of dialectic, it’s better to create the meritocratic culture to contend with Randian ideals. Randian followers are Mythos people; they can’t be lured in with logic directly.

Firstly, you have to realize the cultural setting and political shifts you’re interacting within. These people talk over themselves in a frequent stream of non sequitirs and other logical fallacies. They don’t care about accuracy.

Secondly, what would be the point in convincing people of a system you can imagine, but not they? That’s not even possible, right?

Focus on yourself. Transform yourself. Be the most meritorious. When you offer better things, society will benefit in true scales of wealth - not flawed ideologies and flawed votes and imaginary currency to go alongside it. If we are really meritocrats, then we’re talking about changing the world, which starts with ourselves – not opinions of others. You’re trying too hard.

I should clarify that whenever i do have a debate with libertarians, my goal is not to convince them of anything, ever. My goal is everyone else reading the thread, seeing the exchange, checking out the sources and information provided. While the libertarians might lose their temper and toss around words like “socialist” and “collectivist” i’ll always remember the audience, and act accordingly.

Libertarianism is in many ways a religion, there is an almost superstitious belief in free market mechanisms and human nature, they wont change their minds ever. It’s the audience that counts. They are the ones who will be convinced one way or the other.