“Stop to consider how the so-called owners of the land got hold of it. They simply seized it by force, afterwards hiring lawyers to provide them with title-deeds. In the case of the enclosure of the common lands, which was going on from about 1600 to 1850, the land-grabbers did not even have the excuse of being foreign conquerors; they were quite frankly taking the heritage of their own countrymen, upon no sort of pretext except that they had the power to do so.”

Not very often do the people win over big business or absentee landlords, but one case in modern times stands out above all the rest …

The Isle Of Eigg : A Blueprint For The Future?

At less than six miles long and 3.1 miles wide, the Isle of Eigg on Scotland’s west coast stands as a shining example of people power … 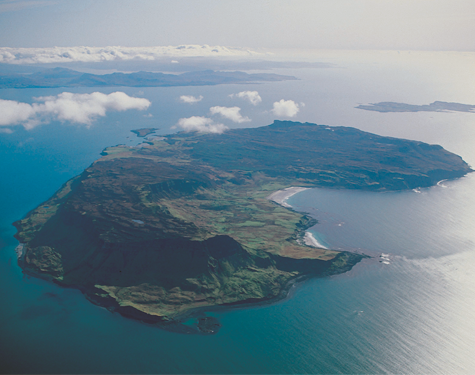 Up until the 1990’s Eigg had been owned by a series of absentee landlords. At this time, the population of around 90 islanders decided to form a community land trust and put in a bid for a community buyout.

This was blocked by the then owner Keith Schellenberg, who liked to drive around the island in a Rolls Royce.

As a glaring example of everything that’s wrong with backdated Britain, he owned everything and decided everything: from jobs to housing and transport to maintenance, [of which very little happened under his watch] as its feudal laird.

An outraged Schellenberg threatened to evict any tenants involved with the trust, but needing to pay for a divorce, quickly sold the island on to a German academic called Maruma.

Luck was on the islanders side however, as he too needed the money and decided to sell quickly. Unlike Shellenberg, Maruma had no qualms about dealing with the community trust as long as they had the cash for a buy-out.

I was one of ten thousand individuals world-wide who pledged donations at the time. £1.6 million was raised, an amazing feat in a time before internet crowd-funding. The community buy-out went ahead in 1997 and the islanders themselves now own the Isle Of Eigg, instead of a wealthy absentee landlord.

When I managed to visit the island while doing voluntary work with the Scottish Wildlife Trust in 1999, I was heartened to see my name had indeed been added to ‘The Book Of Eigg’ as promised, along with all the other donors. The real win was for the islanders though, now they decide almost every aspect of their own lives.

The Isle Of Eigg Community Trust can now set fair leases on housing and also decide what gets built and where. They can keep housing prices low as land is only leased to those who’ll promise not to sell it on at exorbitant prices.

They’ve also managed to install an electricity grid system that was much needed. It’s a great example of what can be done with highly focused and united people power: 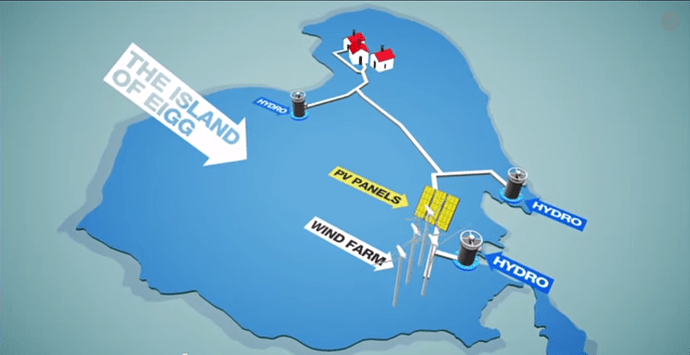 “When it was recognised that conventional mains power was not a practicable proposition, the islanders decided to create and run their own all island electricity system; a system that was to depend as much as possible upon renewable resources.

The system that has been created through the vision of the islanders, generates power at a number of locations around the island, from the renewable resources of Hydro Electric, Wind and Solar energy, and makes this available to all households and businesses via an island wide high voltage distribution grid. The renewable resources will contribute over 95% of the island’s electricity demand and it is believed to be the first time that these three resources have been successfully integrated into a community grid system.”

There’s no reason why this kind of community ownership model can’t be replicated and adapted to fit anywhere, from rural areas to inner cities. Vandalism and petty crime is almost always certain to drop in communities who have a financial stake in their own areas, however small.

The present system of Council Tax in the UK just doesn’t translate into shared ownership in most people’s heads. It’s seen as yet another bill of many they have to pay, on top of basic rent. Community Ownership could completely turn this around and bring local people to take much more pride in the areas in which they live.

The Eigg Community Trust and the way it operates epitomizes a Meritocratic Society in many ways. The management group seeks advice from leading experts on any problem and the possible solutions are given out to the whole community, who make the final decisions by voting on it.

However, not all is well when it comes to land ownership in Scotland. This very week, Channel 4 News highlighted the case of 7 tenant farmer families on the Isle Of Arran, who face eviction due to bad legislation by the Scottish Government in 2003, which was later overturned by the UK Supreme Court.

This was dubbed ‘The Island Clearances’ by a spokesman for the Scottish Tenant Farmers Association. The farmers calls for ScotGov to honour their promises of compensation for the evicted famers have so far fallen on deaf ears.

I propose in the future, that the Meritocracy Movement and Parties should absolutely encourage and campaign to empower communities much further in relation to community ownership of land.

Community buyout bid by Wanlockhead, the highest village in Scotland :

"Scotland’s north-west has been the crucible of land reform so far but the Trust has the backing of buyout umbrella group Community Land Scotland, and hopes its buyout will break the mould and show the way forward for more groups south of the Highland line.

“We are confident it will happen, even if we don’t know what it’s going to look like,” says Blewer. “Going to places we have been treated like heroes for trying this – we’ve been told what we are doing is very important for Scotland.

“Some people are looking at what is happening here and thinking that it can be a model, a template for the rest of Scotland outwith the Highlands.” 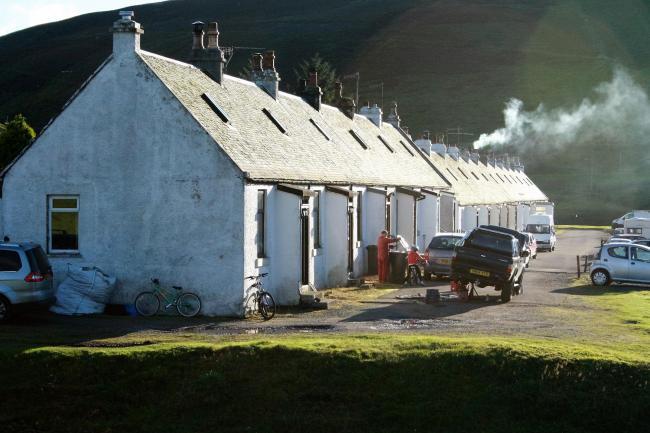 Community Buyout For Wanlockhead - South Of The Highland Line

Both inspiring stories. I wonder if we may have such luck, like those at Eigg, that if Charles becomes King and Camilla calls it a day, he would sell his assets to pay for a divorce ? Joking aside, I think it could work. I think Scotland works similar to UK with County Councils having ownership of most of the so called public land, there is potential to run communities as residents see fit. So long as it doesn’t conflict with Government laws. Which is another hurdle for the future.